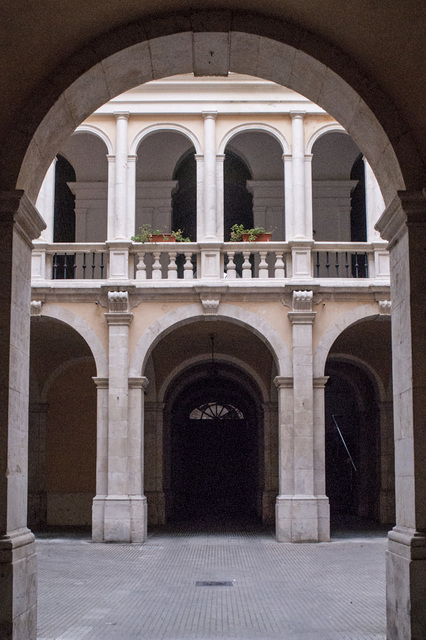 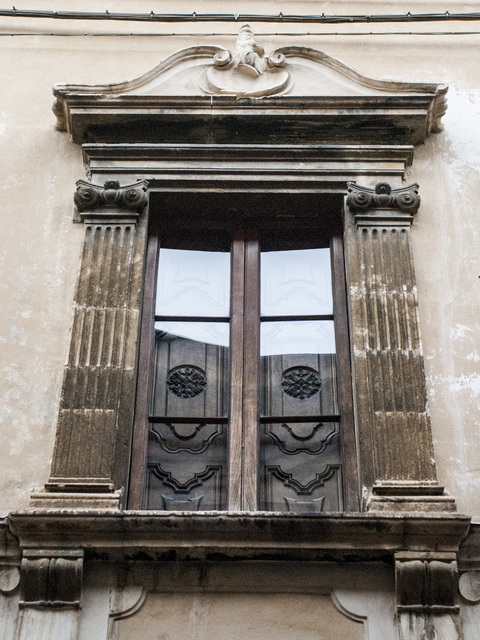 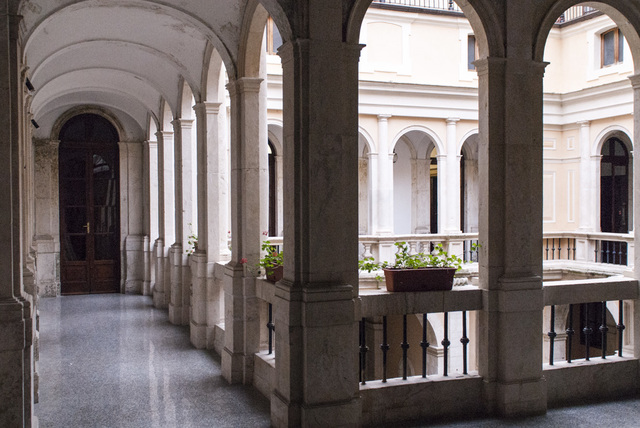 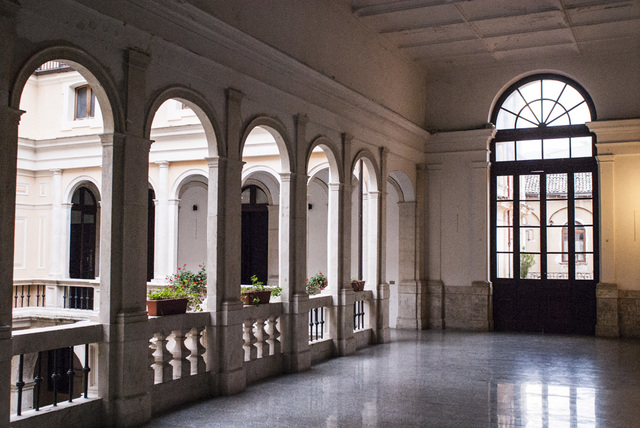 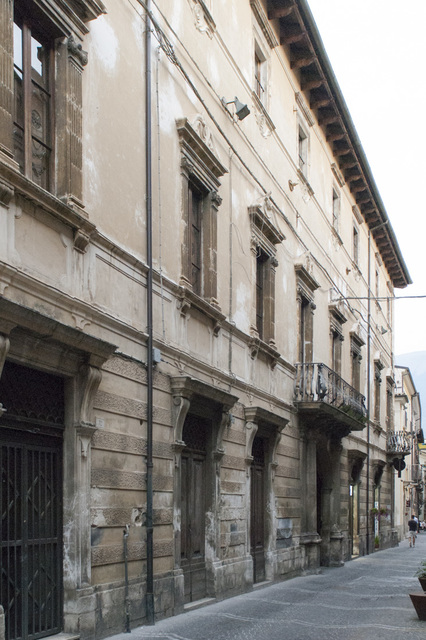 
Located in the historical centre of Sulmona, Palazzo Mazzara is one of the most significant architectural examples of the 18th-century city which rose from the ruins of the terrible earthquake in 1706. Built on the structure of an existing building, probably from the 16th century, Palazzo Mazzara has architectural motifs and decorative baroque features which characterize the buildings of the second half of the 18th century in the Sulmona area.


On a typological level the building has a compact facade with massive corner cantonal stones, similar to the remaining noble dwellings in Sulmona from the same period.


The first mention of the existence of this building dates back to 1748, when the Notary Patrizio di Sebastiano of Sulmona drafted a document in which the Mazzara family bought some buildings that would be soon be amalgamated into the new palazzo.


In all probability, the 18th century intervention did not consist of a real reconstruction of the previous building; but the main load-bearing walls were reused (as we can see by some obvious irregularities in the layout of the walls of the building) and they were added to with other buildings, some of new construction, and others which came instead from the transformation of other premises which had been acquired in 1748 by the Mazzara family .


This hypothesis seems corroborated by the relatively short period in which the work took place as it appeared to be nearing completion as early as 1759.  In this year the Marquesa Smeralda Mazzara agreed with the master carpenters Agostino Giovannucci, Cristofaro Mascilli, Michelangelo Saccoccia from Sulmona and Pietropaolo Magnacco from Roccaraso, that they were to produce the ornaments for eight walnut windows for the building, which, according to the design had come from Naples, and were then modified by Ferdinand Mosca from Pescocostanzo.


The close link with the Neapolitan artistic culture is apparent in the plans of the building. Although there are no dates on the plans, which are now kept at the City Library "P. Ovid Naso " in Sulmona,

we can see this from the manner in which they were drawn, and the architectural solutions which were adopted, which point to the mid-18th century.

The drawing shows the design of a grand staircase with three flights, clearly of 18th century taste, to be placed along the sides of the courtyard of the building. From the ground floor the plan was for two flights of stairs placed either side of a central fountain, located at the end of the visual axis that leads from the entrance to the middle of the back wall of the courtyard.

The ambitious architectural project, which would have given "great beauty and comfort" to the building - relegating the previous steps, located along the right-hand side of the courtyard where the warehouses were - was never implemented due to economic problems. Thus the old staircase was kept and, a few years later, the fountain was made which is currently located on the large terrace - which was once a roof garden - which overlooks Via Peligna.


At the conclusion of the 18th century works, a cadastral extract of 1764, counts among the posessions of the Marquesa Smeralda Mazzara "a palatial home with many different elements including a roof garden, basement, warehouses and other comforts."


The documents however say nothing of the reconstruction of the courtyard.  From a stylistic analysis of the architectural elements, it would appear to be a result of work dating between the end of the 18th century and the first decades of the next century. This is particularly evident in the severe Tuscan order that leads to the loggia of the first floor of the courtyard, which is directly attributable to Abruzzo examples from the early 19th century.


A further indication of this is given on an inscription, still visible on a small window located on the inside wall of the facade of the courtyard, which is dated 1837.


At present, it is not possible to confirm with any certainty the date of the courtyard work.


From a careful analysis of the 18th century plans, preserved in the library, we cannot see the presence of the complex system of stone balustrades, alternating with metal elements, and the foundations which support the Tuscan columns that currently exist.


Furthermore in the 18th century design, the full wall decorated with rectangular panels, which today concludes the row of columns to the left of the porch near the wall to the entrance to the courtyard, is interrupted by the opening of a window that lights the stairwell behind.


It is common knowledge that in 1885 the building was the subject of further work, transforming both the external walls of the building, which were changed through the creation of new entrance ways with stone portals, and the interior which was painted and embellished with two marble fireplaces.  Interventions of this kind included several more during the first decades of the 20th century (in 1913, 1928 and 1931).


In the second half of the 1950’s, the building was allocated for use by the Technical Institute for Surveyors. Perhaps for reasons of health and hygiene, the stone architectural features of the courtyard were covered under a layer of dark paint.  In addition, to meet the functional demands of the school, the loggia at the south-east of the courtyard was boxed-in to house the toilets.


Unfortunately, these works included clumsy cleaning of the stone elements of the courtyard from the layer of paint affixed in the 1950’s, through the improper and harmful use of electrical drills.


In 2006 the courtyard was the subject of a restoration project - in particular of the decorative and architectural stone elements.


Currently, on the first floor of the building are the offices of the Regional Centre of Culture and the Presidency of the Council of Sulmona, while the third floor is, in part, privately owned.


The building occupies an entire square block bordered by Via Panfilo Mazzara, Via Carrese and Via Peligna. The principal facade of the four sides is divided into three levels: the ground floor features entrances into the various business premises and is decorated with horizontal bands from the late 19th century. The main floor has windows with fluted ionic pilasters and curvilinear gables which alternate with balconies of various sizes. The balconies, which feature wrought iron railings in the Spanish style and have a mixtilinear profile are in the middle, above the main entrance, and at both ends of the facade. The embellishments of the three levels, which on the main floor feature cornices and window sills with a string course, seem less obvious on the second floor, where the rectangular windows with a straight crown and sill are decorated with stucco and are unified by a thin moulded frame. The middle area of the facade is enriched by the doorway with Tuscan half-columns on a base, framed on the outside with pilasters. The inner courtyard, with a square floor plan, is surrounded on three sides by an arched portico supported by pillars. The vaulted roof has spacing twice that of the loggia on the second level above it which features arches on columns. Half of them therefore sit on the keystone of the arch below, visually contradicting the architectural principle that avoids placing full elements over voids. On the third top floor level there are square, tiled windows which conclude and frame the view of the courtyard.
The ground floor and the basement were once service areas with cellars and storerooms needed for the family’s activities which included agricultural production, wine making and breeding animals. Today these areas are used by local businesses and for storing local municipal property. The municipal archive records are kept in the underground premises. On the main floor, where the family went about their daily life, are the two large rooms used for entertaining, which show relief decorations in gilded stucco and medallions from Mythology on the ceilings. The smaller room, possibly used as a dining room, shows in the middle what was probably an episode of the story of Psyche, according to the story of Lucius Apuleius. There are two wooden doors, by the famous cabinetmaker Ferdinand Mosco, which connect to the adjacent space, which was perhaps intended as a ballroom or reception room, where the theme of the ornamentation is the Judgment of Paris. Other rooms, arranged in sequence, were once decorated with bucolic and pastoral scenes in tempera on plaster. In the middle room we can still see a fragment with a country scene. Even the private wing is embellished with decorations, in this case allegorical. The master bedroom, with a pavilion vault, bears a central rosette with plant motifs and oval medallions with a married couple joined by a chain and other symbols of married life. Adjacent to it is the library with the adjoining study, also with an ornate ceiling. From the central loggia, through french windows, you enter the large terrace, which at one time was a roof garden planted with citrus fruits as a reminder of the family’s homeland. It was made in about 1764 and is contemporary with the rococo wall fountain in the niche which has a central mask and marine motifs. It is flanked by two medallions with Latin verses referring to the waters of the river Gizio and the scent of flowers.