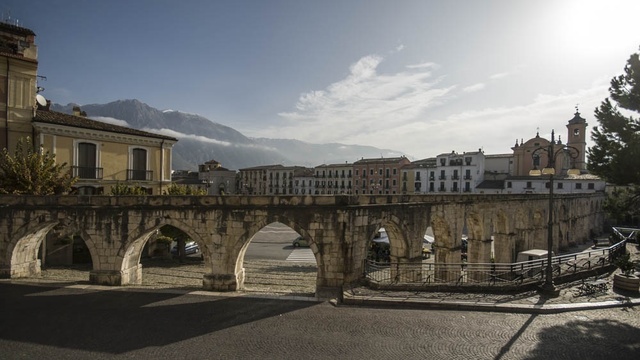 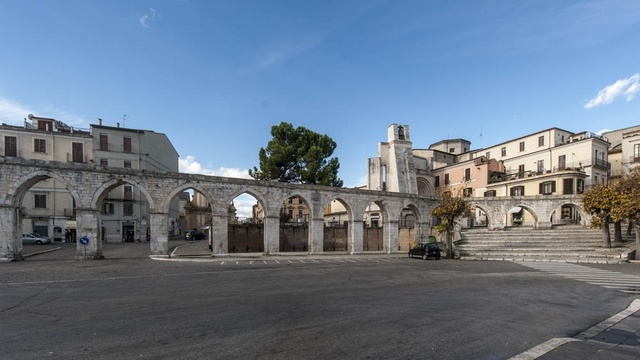 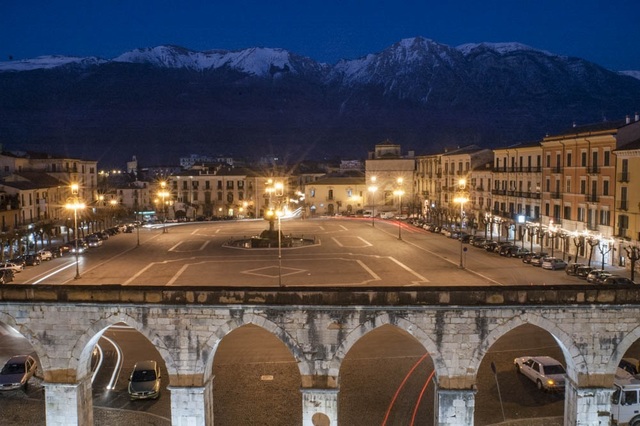 The aqueduct, rises at the  limits Piazza Garibaldi - great for extension (about 100 mx 50 ) and one of the largest of the South Centre - was built , as the inscription engraved in inaugural stone in Teutonic character among its central arches , in 1256 , during the reign of King Manfred of Swabia . It is representative of the economic flourishing, demographic and cultural Sulmona had achieved , thanks to the support of Frederick II, who had in fact given a role of great importance at the local level . A water pipeline of remarkable flow rate , large-scale infrastructure at the service of a town , at that time very active : Sulmona was the seat of the fact “Giustizierato” , a pulpit of canon law and, most importantly, one of the seven annual fairs established by Frederick II in the Kingdom of Sicily to encourage trades and productive activities. Always "very rich in fresh waters", as recalled by the Roman poet Ovidio in his verses (Tristia, IV 10), Sulmona and its territory even in Roman times it was equipped with a complex irrigation system and aqueducts that ensured the water supply in the town and in the countrysides. So it is thought, probably, the aqueduct Swabian traces in reality the path of a previous water pipeline from the Roman era.
However, it was only in the thirteenth century that the work was fulfilled, thanks to the efforts of all the townspeople, whose entrepreneurial spirit is, in fact, mentioned in the inscription in which proudly the inhabitants of Sulmona claimed the building as magnificent work of the community: "Sulmontinorum laus est".

The water of the river Gizio, intercepted in the upper part of the town, was well conveyed in a channel with several branches, up to flow free surfaces on the magnificent ogival arches supported by massive pillars of local calcareous stone, to feed the vegetable gardens, providing energy to mills and to little local shops and finally emerge, fresh, in the fountains.