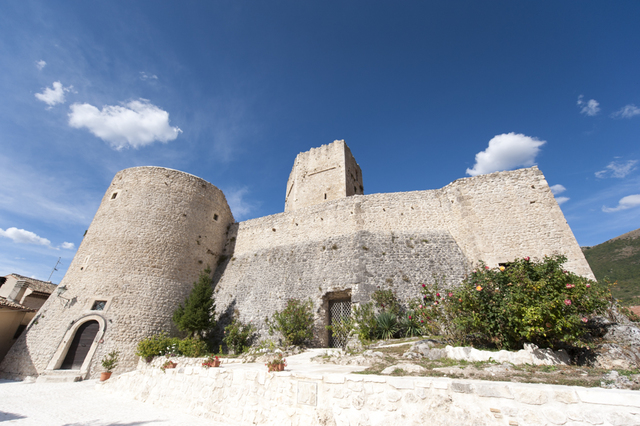 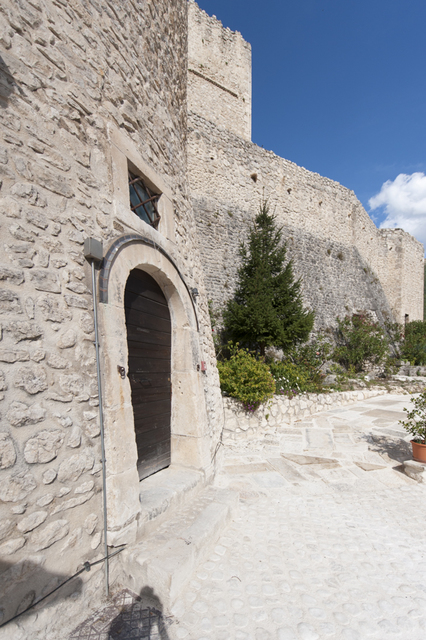 Originally the castle was probably comprised of only the central, pentagonal, lookout tower (strut) which is made of uneven stone and crowned above by corbels.   Around that grew the current perimeter structure which is characterised by the curtain wall (which completed the defensive system), the two round towers of different diameters at the north-west and south-west corners and the prismatic southeast tower.
To the northeast there also arose a fourth tower. Over the centuries houses were built on the site leaning right up against the castle, to the point of blocking the path around the tower.
The wall system is characterised by the so-called "a sacco" with its external facing in rough-hewn stone and lime mortar. The edges of the structure are fortified with square blocks. Overall the fort is compact and devoid of decorative elements, with small openings consisting of arrow slits and musket openings.
On the highest tower were the crests of the Angevin and the Cantelmo families.  Other elements, together with the portals, were sold, while everything which graced the interior was plundered.
In the 1990’s the Superintendence for Architectural Heritage in L’Aquila took care of the consolidation work of the walls and the interior refurbishment - partially transforming the complex into a space which houses temporary exhibitions.

The Castle at Pettorano was one of the most strategically important garrisons of the Peligna Valley and was part of the larger complex which included defensive fortifications surrounding Popoli, Pacentro, Introdacqua, Bugnara and Anversa degli Abruzzi. In order to control the territory during its long reign, the Cantelmo family wove a dense network of relationships between the villages, including allowing visual communication between them, although some castles were far away from each other . In a document dating from 1093, and kept in the archive of the Cathedral of San Panfilo in Sulmona, we can read of the first fortification (in castellu qui pectoraniu bocatur) and it is in this period (1021 to 1093) that the building of fortified structures and the delimitation of the territory was subjected legally to the castle, its people and its interests. Also documented is the fief of Oddo, son of Oddone Pettorano during the Norman rule between the years 1154-1161. Even during this period the castle was an economic reality with an established policy. Later it played a strategic role with Frederick II, who implemented a re-conquest policy of the territories of Abruzzo after the oppressive events of the Hohenstaufen family (the Swabians). But it was in the late 13th century, under the reign of the Angevin Amyl d'Agoult (a direct relative of Charles of Anjou, who received the fortress following his wedding in 1290 to Giovanna, daughter of Odorisio Ponte), that the castle became more important within the feudal state of the Cantelmo family. Margherita "de Agoto" later gave the castle to Restaino Il Cantelmo as part of her dowry and the family then held control of the fort until the mid-18th century when it was transferred to the Tocco family. In 1806 feudal privileges were abolished but only in 1977, after a series of private measures, was the castle given free of charge to the Village of Pettorano.